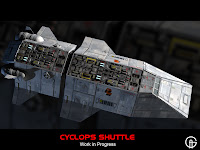 I built this ship as a scratchbuilt model out of plastic card and kit parts back in the early 80's, it had only been built a few days when it had a run in with a desk lamp, it lost it's rear wings and the front cockpit got smashed up, it underwent a few repairs but I never got around to ever fixing it back up fully. 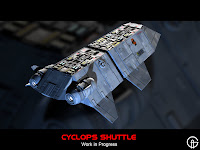 The picture at the bottom of this post is the only photo I have left of it. Anyway I decided to make a CG version of the ship and make some adjustments, such as the engines and the underside, the bottom of the model was basically just flat with some panel detail, the CG ship will have a more detailed underside. 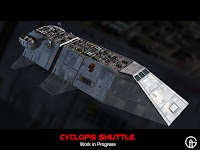 The reason I called this the Cyclops was when making the original model I had some decals off a few different model kits and one had the word Cyclops on it twice, so I decided to use those, you can't see it on the photo but it was in roughly the same area as I've placed it on the CG version.

The original model after it's accident, as you can see around the front cockpit, there's an area of broken plastic, and the smaller rear fins have gone. It's a pretty washed out picture taken with just a bog standard family camera at the time. I was never happy with those engines I'd glued on, which I think were made from some small sized AT-AT feet, so the CG version has new engines with an extra fin for detail.
Posted by Andrew Glazebrook at 6:02 PM

I recently found an old photo album of kit-bashed dioramas I did in the late 70's. Let's just say that CG color will never fade and doesn't need a film lab for processing.

That's too cool. Your CG modeling is always amazing.

I love the shuttle

Great stuff - interesting to see something scratchbuilt translated into 3D

Cool shuttle man, any chance I can snap that one up as well?? I think it'll make a good medical shuttle.

Hey Andrew. Its been a while. You never cease to amaze me with your work. Absolutely fantastic. If I would ever get off my lazy ass and put the pen down and pick up 3D, I just might get somewhere:) I'll be stopping back more and more to check out you projects. Cheers and awesome work as usual!!!